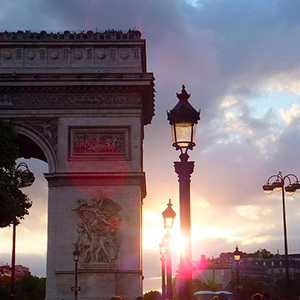 Historical monuments, royal treasures, amazing museums, fantastic shopping, some of the world’s most famous landmarks, an unrivalled theater scene, and beautiful parks-London has it all! On this London tour, you’ll have the opportunity to spend six nights in London with plenty of time to explore the city and some of the more famous sites surrounding it. With an expert Local Guide who will bring the destination to life with first-hand, in-depth knowledge, enjoy a walking tour through Parliament Square with views of the Houses of Parliament and Big Ben as well as a visit to Westminster Abbey, the coronation church for the British Monarchy since 1066. Pay homage to Shakespeare on an excursion to his schoolroom in Stratford-upon-Avon, a beautiful town that offers a glimpse into life in 16th-century England. Enjoy a walking tour of Oxford, a city steeped in history and home to some of England’s most famous colleges. A highlight of this London & Country tour is an excursion to prehistoric Stonehenge, where you can try to figure out how these huge stones were placed there over 4,000 years ago. You’ll also travel to Bath to see the fascinating Roman ruins built roughly 2,000 years ago for bathing and socializing. Globus has also included a special experience to bring a local perspective to this London vacation. Enjoy dinner at a historic London pub and take a relaxed, narrated, nighttime cruise on the Thames River. Plenty of leisure time in London will also give you the opportunity to immerse yourself in the city. From its historical landmarks and monuments to its cultural attractions, this London tour is sure to delight all of your senses!From London, travel to Paris on the Eurostar train. Guided sightseeing in this world-famous city includes a relaxing cruise of the River Seine with views of Notre Dame Cathedral. All services in Paris, including Local Host assistance, are provided by Globus. From its historical landmarks and monuments to its cultural attractions, this London tour-with Paris-is sure to delight all of your senses!

Restless, enduring and wonderful, London is Europe’s largest city. And surely, if you have the choice to visit only two or three cities of the world in your lifetime, by all means make one of them London.

The Romans started it all. The city they developed was “the square mile,” – and Londoners still hunt for Roman relics in the Thames. History is everywhere you look in London, yet today the city is as modern and metropolitan as any city on earth.

By day, London is buzzing with the frenetic pace of commerce not even Dickens could have imagined. By night, the excitement and glitter of theatres, cinemas, pubs and restaurants beckons throngs of travellers from around the world. But there is another London, a peaceful London of cool museums, quiet tea rooms, immaculate gardens and hushed churches.

There is Royal London – ancient pageantry in a modern kingdom – with its palaces, pomp and precise manoeuvres at the Changing of the Guard. And there’s outrageous London, the urban gathering ground for Cockney pitchmen, “fringe” theatre and the city’s youth, with their own distinctive style.

There is also Greenwich, easily accessed from central London by public transport, or take a more scenic route and arrive by riverboat. Notable for both its maritime history and royal heritage, it is perhaps best known for giving its name to the Greenwich Meridian (0° longitude) and Greenwich Mean Time, based at the Royal Observatory.

London, this extraordinary city of contrasts, holds a stunning abundance of hidden-round-the-corner surprises. You owe it to yourself to explore them all. Here, then, is the London you’ll come to know and remember.

As the French capital, Paris is the commercial, financial, and industrial focus of France, a major transportation hub, and a cultural and intellectual center of international renown. A beautiful city in which tourism is the main industry, Paris is cut by the Seine River. On its stately, formal right (northern) bank are many of the most fashionable streets and shops, and such landmarks as the Arc de Triomphe, Place de la Concorde, Louvre, and Sacré Coeur.

The left bank houses governmental offices and is the site of much of the city’s intellectual life. It is known for its old Latin Quarter and for such landmarks as the Sorbonne, the Luxembourg Palace, the Panthéon, and the modern Pompidou Center (see Beaubourg). The historic core of Paris is the Île de la Cité, a small island occupied in part by the Palais de Justice and the Cathedral of Notre-Dame de Paris. Above the city rises the Eiffel Tower. Paris is divided into 20 arrondissements (boroughs) and governed by a mayor.

A fishing village when it was conquered (52 B.C.) by Caesar, it became an important Roman town. It was a Merovingian capital in the 5th cent. and became the national capital with the accession (987) of Hugh Capet, count of Paris. It flowered as the center of medieval commerce and scholasticism but suffered severely during the Hundred Years War. Paris consistently displayed a rebellious and independent spirit, as in its resistance to Henry IV (1589-93); the first Fronde (1648-49); the revolutions of 1789, 1830, and 1848; and the Commune of Paris (1871). During World War II it was occupied (1940-44) by the Germans but was relatively undamaged.

Prices are per person, land or cruise only, based on double occupancy. Offer subject to availability and change without notice. Some restrictions may apply. Please ask us for details.

Charges not included in the land vacation price: airfare to and from the start of your vacation; airline baggage fees including checked and/or excess baggage fees; Federal inspection fees for the Federal U.S. Customs and Immigrations; agricultural tax; other per person taxes imposed by government entities; applicable cruise taxes, fees, fares and port charges; passports; visas and vaccinations; transfers; tips to your Tour or Cruise Director, Local Host, driver, Local Guides, and/or ships’ crew; gratuities on ferries, trains, and cruise ships; laundry; telephone; minibar; alcohol, beverages, and food outside of the contracted menu as presented at a hotel or restaurant (these extra items will be billed to you before leaving the hotel, ship, or restaurant); additional excursions and activities not listed as ‘included’ in the itinerary; porterage at airports or train stations; Travel Protection premiums; and all other items of a personal nature.

Request A Quote Send To A Friend Have A Question? Contact Us

Send To A Friend

Please don't close or refresh the page while we are processing your submission
Please be patient, this could take a few minutes.